Quote of the Month….now that sequestration has hit home with their 2% rate cut, we have repeated what we feel is last month’s very appropriate quote:

“The only thing I  know for sure about sequestration is that the salaries and benefits that our congressmen, congresswomen and senators receive won’t be affected one iota by sequestration.”  Harry Newton

The stock market in general continued its tear with the S&P 500 showing a very nice year to date increase of over 10%.  For this first quarter however our Stoneridge Partner’s Home Health Index (HH Index) is up a paltry 0.7%.

Last month we stated that, after a free-fall from the $40 area, our HH Index had stabilized.  Perhaps a better word for it now is that  it stagnates.

Addus HealthCare , because they have very little Medicare revenue, is not included in our HH Index  (NASDAQ:ADUS).  On March 1 they announced the sale of substantially all of the assets of their home health division (primarily Medicare).  They state that they will now focus on the dual eligible Medicaid population.

Here are the results for our HH  Index:

GRAPHS:  This first graph shows the HH Index compared to the actual prices of the individual companies that make up the chart through March, 2013.

Note that by hovering your pointer over a spot, you will get the price at that point.  For the past decade, it’s been quite a ride

This third graph is a 12 month trailing chart of the HH Index compared to the actual prices of the individual companies that make up the chart, through March, 2013.

INDUSTRY GROWTH –What follows are the year end results for all companies in the HH Index, compared to the previous year.  By the numbers…..

To make matters even worse we have the 2% sequestration cut that took place April 1…..which we no longer hear anything about in the news.  Hopefully congress is in super secret sessions coming up with a solution.  One thing for sure, as our quote above states, their salary and benefits are not affected.

After a very busy year-end, there has been very little in announced sales.

LAFAYETTE, La. (April 2, 2013) – LHC Group Inc. (NASDAQ: LHCG) has acquired the assets of Infirmary Hospice Care in the State of Alabama, which is a Certificate of Need (CON) State for hospice services. The acquired hospice agency, located in Mobile, Alabama, will continue to operate under the name Infirmary Hospice Care through the remainder of 2013 and serve Mobile and Baldwin counties. Current annual revenue for this agency is approximately $2.5 million.

Other than that one announcement we have not seen any other acquisitions announced.  We continued to expect M&A to return as a driver of growth as reimbursement visibility improves.

If you hear of any sales please let us know.  At the end of this column we have a form you can send to us that can be sent anonymously.

MULTIPLES OF EBITDA based on Enterprise Value (EV) from earning results through the 4th quarter 2012 with stock prices as of March 28, 2013.

Cartoon of the Month, no caption needed 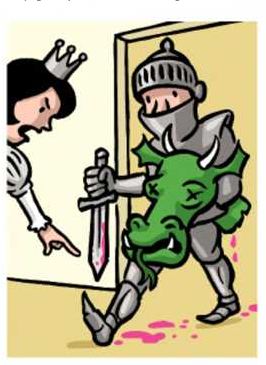 He has slayed the dragon, but she complains about the blood stains…..I thought it very funny.

Early this morning, as I was writing this column (still dark outside), a frog plopped on my desk…right there on the mouse pad, came down from the bookshelf in my den, then jumped to my computer screen.  Scared me to death.  I immediately reached out and grabbed him and he of course peed in my hand.

I threw him outside and told my wife about my scary early morning confrontation with interior wildlife.  Not missing a beat she asked if I washed my hands.  ‘Till next month, Don Cummins

MORE:  And for additional musings on the state of homecare and what’s going on at Stoneridge Partners, visit our blog, which is updated regularly:stoneridgepartners.com/blog